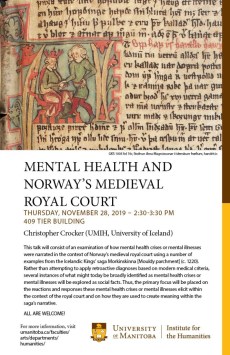 Later this week I’ll be delivering a talk as a part of the University of Manitoba’s Institute for the Humanities regular Arts of Conversation series. The talk is titled “Mental Health and Norway’s medieval royal court” and will consist of an examination of how mental health crises or mental illnesses were narrated in the context of Norway’s medieval royal court using a number of examples from the Icelandic Kings’ saga Morkinskinna [Mouldy parchment] (c. 1220). Rather than attempting to apply retroactive diagnoses based on modern medical criteria, several instances of what might today be broadly identified as mental health crises or mental illnesses will be explored as social facts. Thus, the primary focus will be placed on the reactions and responses these mental health crises or mental illnesses elicit within the context of the royal court and on how they are used to create meaning within the saga’s narrative. The talk emerges from my post-doctoral research within the Disability before disability project.